Italian Flyers, the Frecce Tricolori Crash during
the Ramstein Air Base Airshow

Remember...
• 70 Killed
• 450 Injured
• Thousands witness tragedy
• Countless heros
Those of us who witness tragedy often wonder why we were spared and so many others were not.

On August 28, (1988) more than 300,000 people gathered at Ramstein US Air Force Base near Frankfurt, West Germany. They had come to watch performances by aerobatic teams, the annual Flug Tag Air Show.
Seven planes were doing a maneuver in the shape of a heart when three of them clipped each others wings.

The result was the worst disaster in Air Show History. 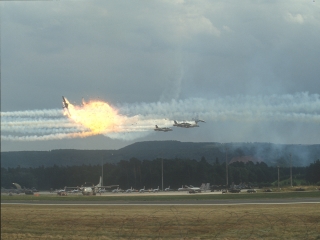 The planes clipped each other.

Two of the planes crashed on the runway. One went hurtling towards the crowd.

As the plane struck the ground it began to catapult into the crowd.
Most people did not even have a chance to run... They just stood staring as the ball of metal and jet fuel headed straight at them.

I was also there that day.
I was stationed at Landstuhl.

I had my four month old son in a stroller and I had taken the day to spend time with my German girlfriends.
This was the first time that they had been on post.

I remember having a bad feeling that day.
Someone made a comment behind me... "One of these planes is going to end up crashing". That statement from a fellow soldier somewhere in the crowd garnered a roll of muttered agreement through the crowd.

We were standing very close to the ice cream van.
I remember thinking that people were being very nice to let us up front with our baby in the stroller.

As the French team flew overhead I had a terrible ominous feeling.
I had to crane my neck as they flew from the air field, over our heads and out of sight behind us.

When the Italian team began to fly so near, I got butterflies in my stomach. I usually would ignore those feelings as just being paranoid and force myself to stay and not 'be stupid'.

I turned to my best friend Christiana. "I don't think they are supposed to fly right over the crowd". I said to her.
"If they had an accident we would not be able to get out of here".

I knew I was not just being paranoid when I looked at Christiana.
Christiana looked at me like she was really scared. "We wouldn't be able to get the stroller out of here. Somebody would trample it", she said.

At that point she removed my son Joshua from the stroller and held him as we turned and started walking towards the barracks. We had a friend who's barrack's were right off of the flight line and, although we knew that we would not be allowed to go into the barracks, especially with the baby, we still headed that way.

I figured my friend would have some idea where we could go to wait for the next bus back to post.

My husband Troy (we weren't married yet) was working that day at the emergency room at LARMC so I could not get a ride from him.

I remember everything like slow motion from that point.
I remember it was so pretty out there.
Just a beautiful day.

My other friends had run off to flirt with GI's and do the things that 20 year old German girls do when they are finally let loose with a bunch of Air Force guys.
I asked Christiana if we should go look for them.
"No, let's just get to the barracks and we'll let the guys go find them.

We got to the front door of the barracks. As I reached my hand down and grabbed the front door, the planes hit. There was screaming.
I still had my hand on the door as the plane hit the crowd. I will never forget that feeling. My entire body was shaking from the blast. It felt like an earthquake. The building was groaning and every glass window was shaking so hard that I thought for sure they would break.

I screamed at Christiana. There wasn't any blast noise really. More like something had hit and sucked all the air away for a minute. I had the sensation that there was ringing in my ears, but I couldn't hear it.
Just intense pressure.

I was yelling as loud as I could to get inside and Christiana couldn't hear me. I felt like my eardrums were going to burst.

We made it inside the door and we were screaming that there was an earthquake. Airmen came running from all over the building, somebody grabbed me and asked if I was Okay.
"The planes just crashed", he said.
"No, I think it's an earthquake"! Sounds crazy now, but somewhere in my mind I knew it COULDN'T be the planes. A plane crash would be loud and this was just heat and pressure.

We found my friend as he was leaving his room to run outside. He grabbed my son and said, "you have to go they called a mass-cal (mass casualty) at LARMC”.

I worked on 1 Delta at LARMC. That is the psyche ward. What the hell good was I going to be in a mass casualty situation?

My friends took Josh and said they would take him back to my girlfriend's house. I had to get on a bus. The Emergency Commander on Ramstein got a bus to carry all soldiers back to LARMC.

When I arrived at the emergency room it was already full of gurneys. It was nearly silent.
I have never witnessed anything like it.

There was a little blond haired girl laying on a gurney, she could not have been more than five. Her burns were so severe that she wasn't even crying. Her eyelids were burned off and she was staring at me and her chest was heaving up and down struggling for breath. The only sound from her was a gurgling as she tried to breath. I don't know if she lived, my husband worked on her, but refuses to discuss it.

At this point I remember almost passing out. My husband came up behind me. "Go see 'So and So' (sorry, can't remember her name), she is in charge of setting up beds”.

I wish I could remember more... or not.
I don't know... it is like a movie I saw, but kept closing my eye's through the scary parts.
I know what happened, but I can't remember it.

I know it lasted all day, but I can only remember a few scenes here and there.

I don't remember riding in the ambulance. I don't know how I got back to Ramstein. I must have ridden in SOMETHING... yet nothing comes to memory.

I went back to Ramstein and our psych department set up an information center for the people who were waiting to hear news about missing loved ones.

It was in some type of auditorium. It was packed full of crying families. I spoke a little German and I was taking names to compare with the ones coming in from the hospital. I was there a long time, but again, I cannot remember more than one or two things.
I remember sitting with a German grandma and grandpa who were looking for their daughter and granddaughter. I remember sitting and rubbing her back while she was crying and clinging onto me.
I remember at some point passing out Kool-aid in dixie cups.

If I met someone who had gone through a traumatic experience like that and couldn't remember what happened, I would tell them to see a psychiatrist. I, however, don't want to think about it.

This is the first time I've ever written about that day. I was much more traumatized than I realized. I am crying as I write this.

I received a 'Letter of Commendation' from the Air Force Commander for helping set up the Information Center.

My husband, who saved countless lives in the ER that day, did not.

My friend from the barracks was given the task of walking the flight line and picking up body parts the next day, but he did not receive a 'Commendation' either.

I have never read that 'Commendation'. I have seen it only once since we left Germany. I found it when we were in the process of moving... I don't know where it is now.

I don't want to see it. It is just a reminder of how utterly useless I felt on that awful day.

There were many more deserving than I, and if I could give that 'Commendation' to anyone I would have given it to my husband... he was truly a hero that day.

We also lost a good helicopter pilot that day, Lt. Strader, in his UH60 Blackhawk, was there for medical evacuations. One of the planes that crashed on the runway actually came down on the Blackhawk. Lt. Strader was inside of it.
God Bless you and yours.

There are memorial sites devoted to the survivors of Flugtag.
They allow people to narrate their own story of their experience on that day.
I recommend that if you have been effected by this disaster you check out the sites and add your story.
It is a way to get out the terrible memories of that day with others who went through it.

My banner and anime came from
flugtag